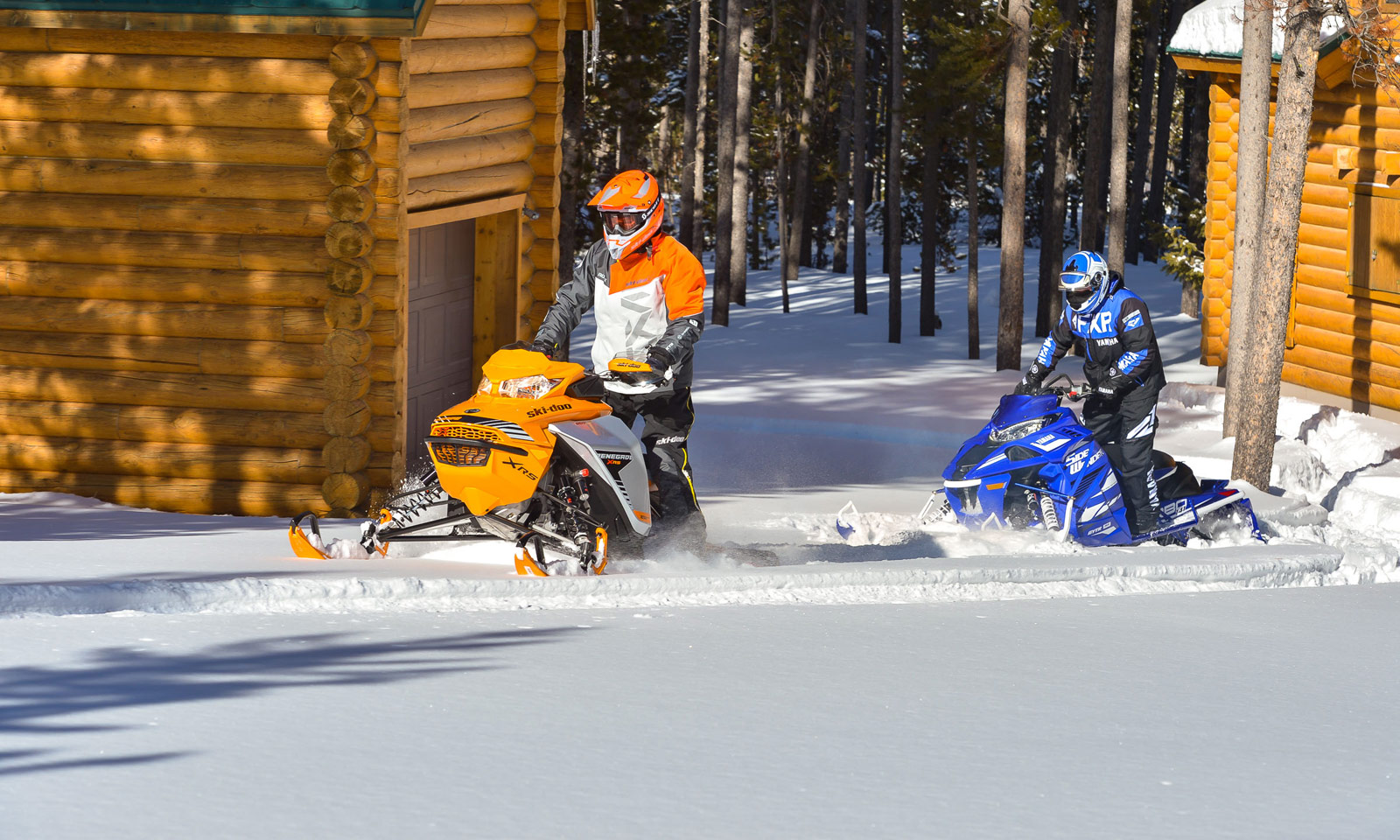 Riding positions can vary with the type of riding you'll be doing as well as your preferred personal riding styles. It is important that you use positions which are comfortable for you and that allow you to easily control your snowmobile at all times. Since each riding position provides different advantages for different situations, it is important to be familiar with each so that you can safely and confidently respond to the full range of trails or terrain conditions you may encounter. 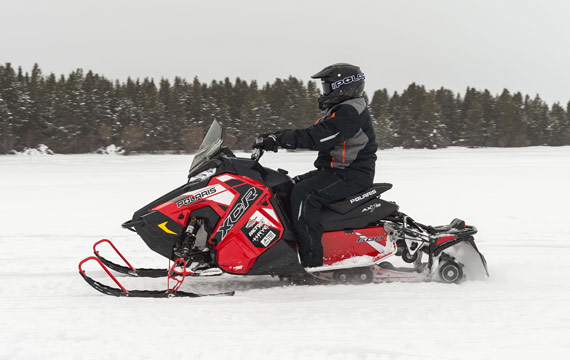 Sitting is the most common riding position and is typically the safest position when riding on trails, since you're less likely to fall off the snowmobile compared to other positions. Position yourself on the snowmobile with your feet flat on the running boards and forward with your toes in the foot well at the front of the running boards. This will help cushion the effects of bumps and also keep your feet safe from the snowmobile's track and objects you pass by. Keeping your body weight low while sitting also makes it easier to lean into turns or shift your weight from side to side to help turn the snowmobile. You should always be seated when operating a snowmobile at high speeds. 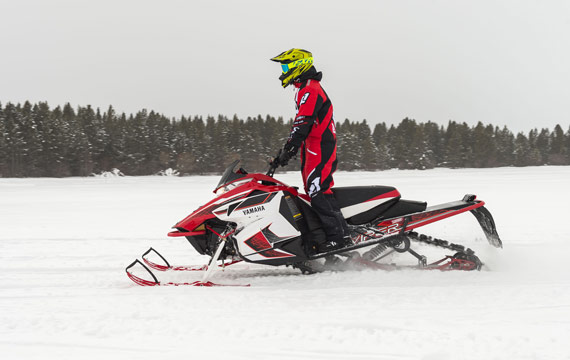 The standing position has become more popular with riders of mountain model snowmobiles since their high handlebar and higher seat design facilitates easy control of the snowmobile while standing. This position is also useful when traveling up steep hills (lean forward) and on traditional model snowmobiles when you have visibility troubles in the sitting position, particularly when operating off-trail. The standing position should be used when crossing roadways to help you see approaching traffic better — as well as to help you be more visible to approaching automobile drivers. Operate at a lower speed and be sure to keep your knees bent to help cushion impacts from bumps when riding in this position.

Kneeling
Kneeling can be an alternative riding position to help rest your body or to provide better visibility. For this position, put both knees up under you on the snowmobile's seat and be sure to keep both hands firmly on the handlebar grips. Always use caution and operate only at slower speeds when riding in this position since it can be more difficult to keep your balance on the seat since neither foot is on the running boards. 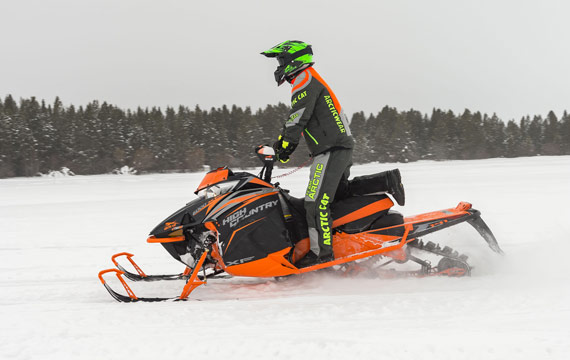 The semi-kneeling position, where one knee is up under you on the seat and your other foot is planted firmly on the snowmobile's running board, can be particularly useful when riding in deep powder snow or whenever you encounter problems with visibility. This position allows you to view where you're driving from a higher perspective as compared to sitting on the snowmobile. The semi-kneeling position is also necessary for riding on side hills off-trail. Your 'plant leg' should be on the uphill side of the snowmobile to facilitate being able to lean your body's weight into the side hill to help control and maneuver your machine. Always operate at reduced speeds and hold on tightly to the handlebars since, if you hit a bump or buried hazard, you could potentially lose control or be thrown from the snowmobile. 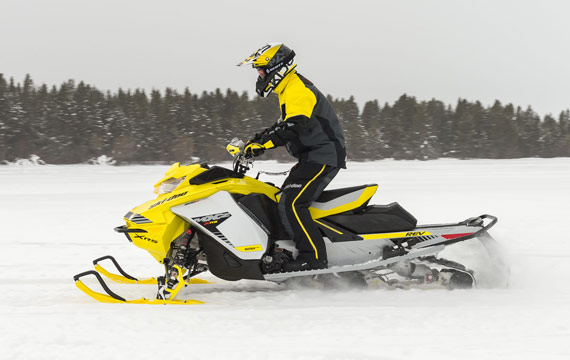 The posting position is a semi-standing position with your feet slightly forward and firmly planted on each running board, while keeping the bulk of your body behind you similar to if you were sitting, but with your body actually slightly above the seat with all your weight resting on your feet versus sitting on the snowmobile’s seat. This position can be useful when traveling over uneven terrain, when you have visibility issues, or for when descending steep hills (by leaning backwards while you're posting). Always keep your feet flat on the snowmobile's running boards and bend your knees when riding in this position. 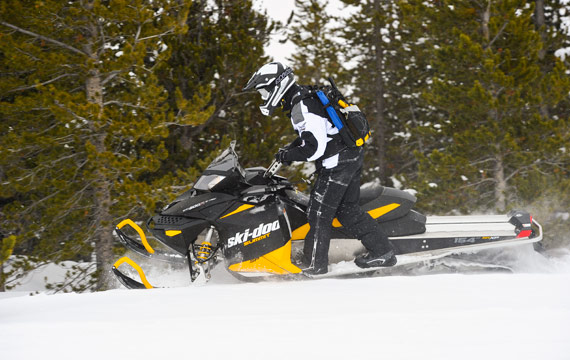 The side hilling position is a variation of the standing and semi-kneeling positions. It requires that both feet be planted together on one running board, on the uphill side of the snowmobile, to facilitate being able to also lean your body's weight off the seat and into the side hill to help control and maneuver your machine. Always operate at reduced speeds and hold on tightly to the handlebars with both hands, or to the handlebar and a mountain strap, since if you hit a bump or buried hazard, you could potentially lose control or be thrown from the snowmobile. This position is particularly useful when crossing steep hillsides or negotiating mountainous slopes.
Next: Hand Signals